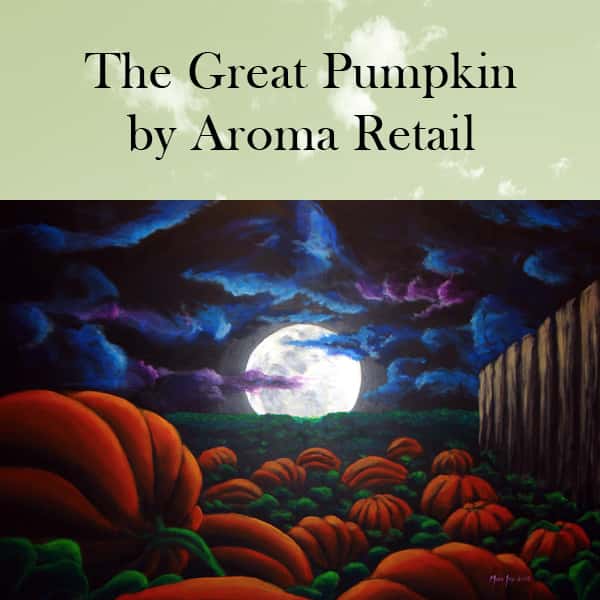 The Great Pumpkin Scent A very unique and luxurious natural Pumpkin blend that is NOT your typical dollar store pumpkin spice. The most prominent notes are Pumpkin and Smoked Chestnuts, harmonized with Cinnamon Bark, Orange, and Winter Jasmine, and finished with base notes of Cedar, Amber, and Sandalwood.

Ingredients: Pumpkin, Cinnamon Bark, Sandalwood, Winter Jasmine, Smoked Chestnuts, Orange, Cedar, Cardamom, Amber
The Great Pumpkin Scent: In Fragrance Oils, Room Sprays, Reed Diffusers, Candles and Scent Machines.
The Great Pumpkin
It is believed that the custom of making jack-o’-lanterns at Hallowe’en time began in Ireland. In the 19th century, “turnips or mangel wurzels, hollowed out to act as lanterns and often carved with grotesque faces,” were used on Halloween in parts of Ireland and the Scottish Highlands. It's the Great Pumpkin, Charlie Brown is a 1966 American prime time animated television special based on the comic strip Peanuts by Charles M. Schulz. A Halloween special, it was the third Peanuts special to be produced and animated by Bill Melendez.

A pumpkin is a  winter squash that is round with smooth, slightly ribbed skin, and is most often deep yellow to orange in coloration. The thick shell contains the seeds and pulp. Native to North America (northeastern Mexico and the southern United States), pumpkins are one of the oldest domesticated plants, having been used as early as 7,500 to 5,000 BC. Pumpkins are widely grown for commercial use and as food, aesthetics, and recreational purposes. Pumpkin pie, for instance, is a traditional part of Thanksgiving meals in Canada and the United States, and pumpkins are frequently carved as jack-o'-lanterns for decoration around Halloween, although commercially canned pumpkin purée and pumpkin pie fillings are usually made from different kinds of winter squash than the ones used for jack-o'-lanterns. China and India combined account for half of the world's production of pumpkins.